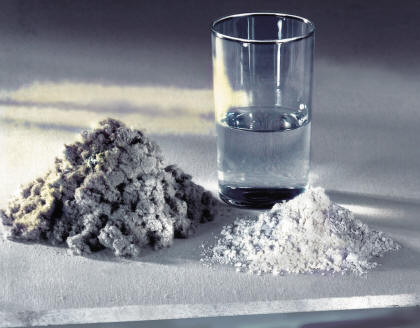 The productive process foresees the mixture of these two components in water (without other binders); the plaster mixed in water reacts (through calcination) and winds the cellulose fibres penetrating them; by submitting this basic homogeneous mixture to compression, Fermacell's plaster fibre plates are obtained in the different wanted thicknesses. After the cut in the various foreseen sizes and the drying, plates are smoothed and treated with a waterproofing primer on both sides. Thanks to the presence of fibres, Fermacell's plaster fibre plates have high stability, very good  mechanical resistance and very good characteristics of resistance to the fire.

For their composition, Fermacell plaster fibre plates lend themselves to be used for the acoustic, thermal isolation and for the fireproof. Fermacell standard plaster fibre plates  are also suitable in damp environments. The composition of  Fermacell's materials is documented by the certificate of European technical approval ETA/03-0050 issued by the institute DIBT of Berlin; the class of reaction to fire according to the norm UNI EN  13501-1 is A2-s1-d0 while in accordance with the D.M. of  26-06-1984 art. 8, with the D.M. of 03-09-2001 and with the experimental tests done in the Institute Giordano di Bellaria, Fermacell plaster fibre is confirmed in "class 0" (zero) of reaction to fire.

These plates don't contain any unhealthy substance and the absence of glues excludes any unpleasant odor: our plaster fibre plates are absolutely a natural product and they obey the directives of the building biology. The institute for the Bio-Building Rosenheim GmbH on the basis of the excellent results of the cheks made on the product, has issued its own mark of bio-compatibilty for all the Fermacell's plaster fibre production lines. For the production of plaster fibre Fermacell has two establishments in Germany (Low Saxony and Baden-Württemberg) and one in Netherlands (Wijchen).